Switch LEDs on and off with smartphone and Micro: bit 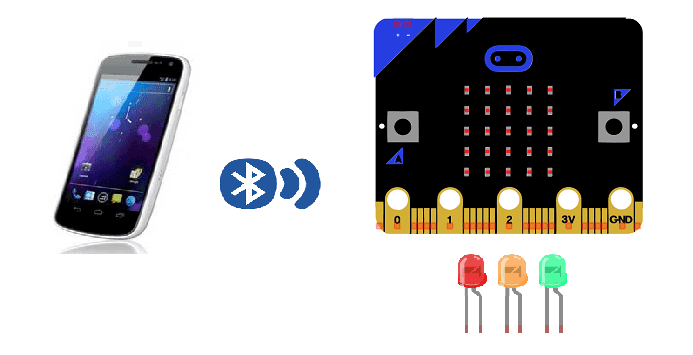 Micro:bit is a small, programmable computer that is designed to be easy to use for beginners. It has a variety of inputs and outputs, including a built-in Bluetooth module, which allows it to communicate wirelessly with other devices such as smartphones and tablets.

It is possible to control the LEDs on a Micro:bit using a smartphone via Bluetooth. Here’s a general outline of the steps you would need to take:

In this tutorial, we will create a system allowing LEDs to be turned on and off (by bluetooth) using the Micro:bit card and a smartphone.

We create two programs: a mobile application with App Inventor for the smartphone and a makecode program for the Micro:bit card.

Micro:bit is a small, programmable computer that is designed to be easy to use for beginners. It is developed by the Micro:bit Educational Foundation, a not-for-profit organization based in the UK. The Micro:bit was originally intended to be used as a tool for teaching computer science and programming in schools, but it has since been adopted by a wide range of users for a variety of different projects.

The Micro:bit is a small device, about the size of a credit card, that has a variety of inputs and outputs, including a 5×5 LED matrix, two programmable buttons, and a built-in accelerometer, compass, and thermometer. It also has a built-in Bluetooth module, which allows it to communicate wirelessly with other devices such as smartphones and tablets.

The Micro:bit can be programmed using a variety of languages, including Python and JavaScript, and can be used for a wide range of projects, from simple games to more advanced applications such as controlling robots and drones.

An LED (light-emitting diode) is a type of semiconductor device that emits light when an electric current is passed through it. LEDs are commonly used in a wide range of applications, such as indicator lights, traffic signals, automotive lights, and electronic displays. They are also used in more advanced applications, such as in lighting systems, medical devices, and fiber-optic communications.

For mounting the Micro:bit card with LEDs you can see the following article: https://www.robotique.tech/robotics/traffic-light-with-microbit/

We are going to create a mobile application named ‘allumer_leds’ with App Inventor which lights up LEDs.

After installing the mobile application on your Smartphone, follow these steps to connect to the Micro:bit card: