Controlling the Maqueen robot with smartphone

Controlling the Microbit Maqueen robot with a smartphone can be done by using a Bluetooth communication module. The micro:bit has built-in Bluetooth Low Energy (BLE) capabilities, which allows it to connect to other devices, such as smartphones.

To control the Microbit Maqueen robot with a smartphone, you would need to:

This way you can control the Maqueen robot with your smartphone, by sending commands from the mobile app to the micro:bit, which then controls the robot’s motors and sensors accordingly.

In this tutorial, we will control the Maqueen robot using the Micro:bit card and a smartphone via Bluetooth.

We create two programs: a mobile application with App Inventor for the smartphone and a makecode program for the Micro:bit card. 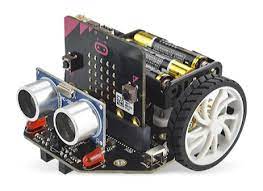 The micro:bit Maqueen is a robot car kit that is specifically designed to work with the micro:bit computer. It is a small, two-wheeled robot car that can be controlled using the micro:bit‘s built-in buttons, accelerometer, or radio module. The Maqueen features two DC motors, infrared sensors, and a line tracking sensor, which allows it to follow a line or avoid obstacles. The Maqueen can also be programmed using the micro:bit‘s drag-and-drop block editor or with Python code. The Maqueen is a great tool for learning about robotics and programming, and can be used to create a wide range of fun and educational projects.

Here is the makecode program which allows you to connect the Micro: bit card to the smartphone and to receive a message containing the command order of the Maqueen robot.

We create a mobile application called ‘commander_maqueen’ with App Inventor which allows the Maqueen robot to be controlled by the smartphone.