Control the lighting of a LED using the Micro:bit buttons 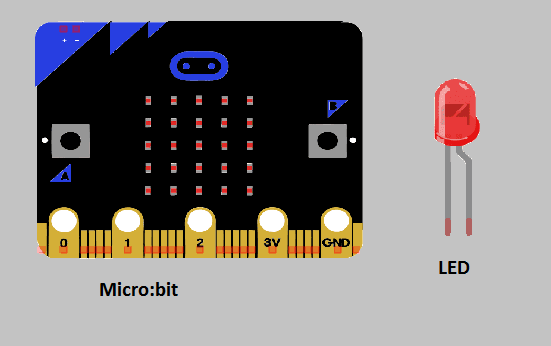 To control the lighting of a LED using the Micro:bit buttons, you will need to connect the LED to one of the Micro:bit‘s I/O pins and write a program that uses the Micro:bit‘s built-in button functions to turn the LED on or off.

Here are the steps you can follow to control the lighting of a LED using the Micro:bit buttons:

In this tutorial we will control the lighting of an LED via the two buttons A and B of the micro: bit card:

1- When you press button A, the LED lights up

2- When you press button B, the LED goes out.

As for the assembly, it is easy to connect LEDs to the micro: bit either by using alligator clips or a micro-bit breadboard adapter.

Here is the makecode program which controls the lighting of an LED connected to Pin 0 of the micro: bit.