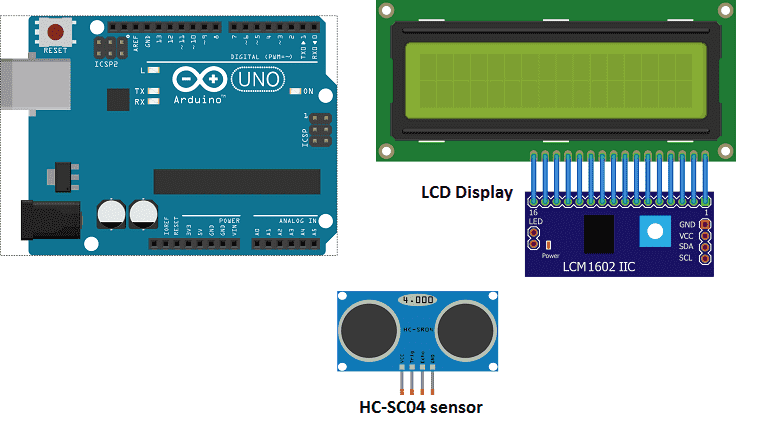 The HC-SR04 ultrasonic sensor is a popular sensor for measuring distance with Arduino. It uses sonar to determine the distance to an object by sending out a sound wave at a high frequency and measuring the time it takes for the sound wave to bounce back.

Once the sensor is connected, you can use the Arduino’s pulseIn() function to measure the duration of the sound wave’s return trip. You can then use this duration to calculate the distance to an object using the formula: distance = (duration/2) * 0.034.

In this tutorial, we will learn together how to use an HC-SR04 reference ultrasonic distance sensor with an Arduino board.we will test the accuracy of the measurements in various situations and display the results from the HC-SR04 Ultrasonic Sensor on an LCD i2c Display.

An ultrasonic distance sensor uses the same principle as a laser sensor, but using sound waves (inaudible) instead of a beam of light. They are much cheaper than a laser sensor, but also much less precise. However, unlike infrared sensors, ambient light and the opacity of the surface in front of the sensor do not affect the measurement.

The HC-SR04 sensor is a low cost ultrasonic sensor. This sensor operates with a supply voltage of 5 volts, has a measurement angle of approximately 15° and allows distance measurements between 2 centimeters and 4 meters with an accuracy of 3mm (in theory, in practice That is not exactly correct).

The operating principle of the sensor is entirely based on the speed of sound.

Here is how a measurement takes place:

The signal on the ECHO pin of the sensor stays HIGH during steps 3 and 4, which allows the duration of the round trip of the ultrasound to be measured and therefore the distance to be determined.

An LCD i2c  screen (Liquid Crystal Display) or liquid crystal display in French is a device that displays characters while consuming relatively little electricity, which is why it is found in many electronic projects and on all types of devices.

The HC-SR04 ultrasonic sensor is a low-cost, easy-to-use distance sensor that can be used to measure distances from 2cm to 400cm. It uses sonar to determine the distance to an object by sending out a sound wave at a high frequency and measuring the time it takes for the sound wave to bounce back. The sensor has four pins: Vcc, Trig, Echo, and GND. Vcc and GND are used to power the sensor, Trig is used to initiate the distance measurement, and Echo is used to receive the sound wave’s return trip.

The sensor sends out an 8-cycle burst of 40kHz sound and listens for the echo. The time for the echo to return is proportional to the distance of the object. The duration of the echo pulse is converted to a distance value by using the formula: distance = (duration/2) * 0.034.

This sensor is commonly used in robotic and automation projects, obstacle avoidance, and distance measurement applications.

An LCD I2C 160A display is a type of liquid crystal display (LCD) that uses the Inter-Integrated Circuit (I2C) protocol to communicate with the controller or host device. The “160A” in the name likely refers to the display’s dimensions, with a screen size of 160×128 pixels. I2C is a communication protocol that allows multiple devices to connect to a single bus and communicate with one another using only two wires (SDA and SCL). This can make it a more efficient and cost-effective solution for connecting multiple devices in a project, as compared to using separate wires for each device.

For the HC-SR04 sensor we connect:

For the LCD display we connect:

Here is the program that displays the distance in cm that separates the ultrasonic sensor from an obstacle.

Note: you must import the library HCSR04.h for ultrasonic sensor and library LiquidCrystal_I2C.h for the LCD display.

How the code works:

Then you initialize the HC-SR04 sensor with the pins.

In the loop() you trigger the sensor and the measured distance is displayed on a 1602 I2C LCD screen.