Display a number on TM1637 display with ESP32 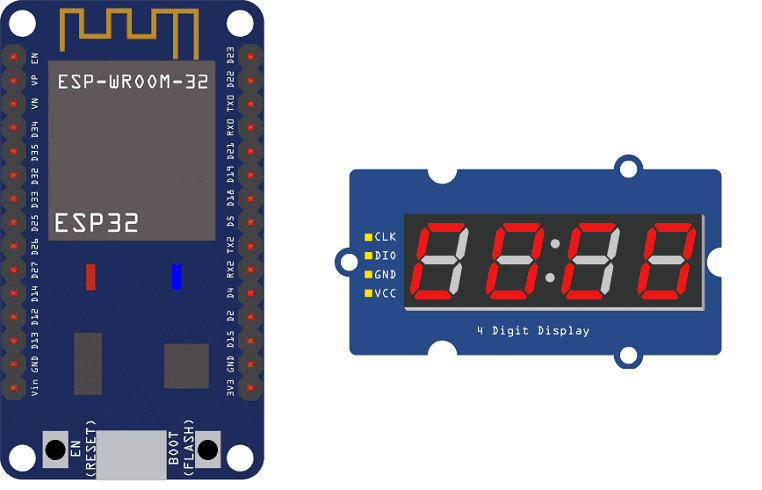 The TM1637 display is a 4-digit, 7-segment LED display that can be used to display numerical values, and the ESP32 is a microcontroller with built-in WiFi and Bluetooth capabilities, which can be programmed using the Arduino IDE.

To use the TM1637 display with an ESP32, you will need to connect the display to the ESP32 according to the wiring diagram provided by the library.

Typically, the TM1637 display requires two data lines to communicate with the ESP32, one for the clock signal (CLK) and one for the data signal (DIO). The ESP32 can then send commands to the display over these lines to control the display.

Once the display is connected to the ESP32, you can use a library such as the TM1637 library for Micropython, which provides a set of functions for controlling the display.

The library provides functions for initializing the display, displaying numbers and characters, and controlling the brightness. You can also use the library to control the display’s colon and the display’s dot.

In this tutorial we will see how to display the number 10 on the TM1637 display with the ESP32 card.

The TM1637 display is a 4-digit, 7-segment LED display that can be used to display numerical values and simple characters. It is a common-cathode display, which means that all the LED segments share a common cathode terminal.

The TM1637 display has a built-in LED driver that can control the brightness of the display. The brightness can be adjusted using the built-in commands.

The TM1637 display also has a built-in function to control the colon and dot of the display. This feature can be used to create a clock display, for example.

The TM1637 display is a low-cost and low power consumption display, which makes it a popular choice for a variety of projects, such as digital clocks, counters, temperature displays, etc.

There are different libraries available for different microcontroller platforms such as Arduino, Raspberry Pi, ESP32, etc. These libraries provide a set of functions for controlling the display and make it easy to use the TM1637 display in your projects.

Note: the following library must be imported: tm1637