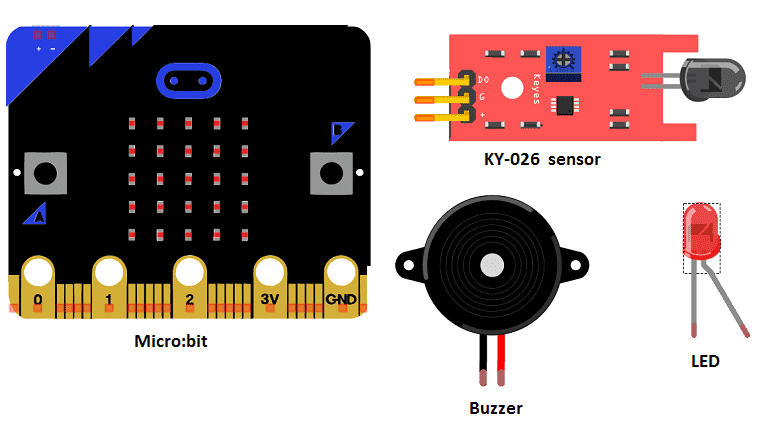 It is possible to use a Micro:bit to control a fire detection system, though it would likely need to be done as part of a larger system that includes sensors, alarms, and other components. The Micro:bit could be used to read input from fire sensors, such as smoke detectors or heat detectors, and then trigger an alarm or send a signal to the fire department in the event of a fire.

One possible way to accomplish this is to connect the Micro:bit to a network of fire sensors using its input and output pins. The Micro:bit could then read the signals from the sensors, and if a fire is detected, it could trigger an alarm or send a message to the fire department via a wired or wireless communication module.

Another possible way is to use the Micro:bit‘s built-in temperature sensor to detect heat, or a smoke sensor or flame sensor connected to it. The Micro:bit can then use its LEDs or buzzer to sound an alarm, or send a message via radio or Bluetooth to a central control panel or to the fire department.

In this project a fire detection system with Micro:bit will be realized. It mainly uses a KY-026 flame sensor, buzzer and LED. When the flame sensor detects a fire, the Micro:bit board orders the buzzer to ring and the red LED to light up.

The KY-026 is a module for the Micro:bit that includes a flame sensor. The module is used to detect the presence of a flame, and it outputs a digital signal that can be read by the Micro:bit. The output signal can be used to trigger an alarm or to send a signal to a central control system.

The KY-026 module can be connected to the Micro:bit using its input/output pins and it can be programmed using the Micro:bit‘s software development kit (SDK).

A buzzer is an electronic device that produces an audible sound when an electrical signal is applied to it. It can be used in a variety of applications, including alarms, doorbells, and other warning systems.

A red LED (light-emitting diode) is a type of semiconductor device that emits light when an electric current is passed through it. It is commonly used as an indicator light in electronic devices, and it can also be used for lighting and other applications.

A red LED can be connected to a Micro:bit using its input/output pins. The Micro:bit can then send a signal to the LED to turn it on and off, or to change its brightness. The Micro:bit can also be programmed to control the flashing, blinking and fading of the LED, depending on the use case.

Resistance is a measure of a material’s ability to oppose the flow of electric current. It is measured in ohms (Ω) and is represented by the Greek letter omega (Ω). The resistance of a material is determined by its composition and temperature.

To complete the assembly, you can connect

The mounting methods are numerous and here are some examples:

The Fire Detection System makecode program is as follows: