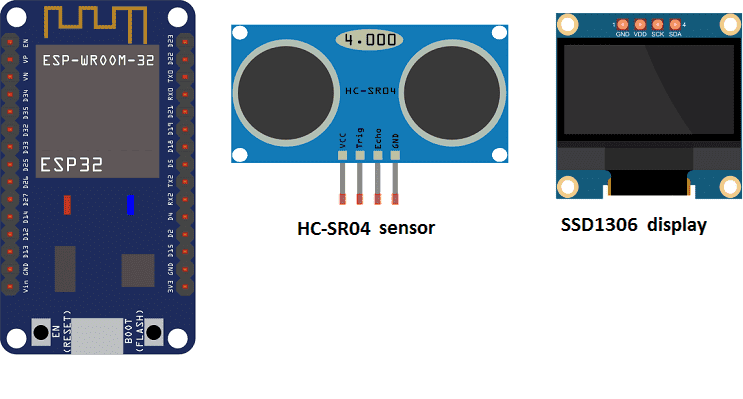 The HC-SR04 is an ultrasonic distance sensor that can be used to measure the distance to an object by sending out a sound wave and measuring the time it takes for the sound wave to bounce back. The ESP32 is a microcontroller with built-in WiFi and Bluetooth capabilities, which can be programmed using the Micropython. The SSD1306 is a monochrome OLED (Organic Light Emitting Diode) display that can be used to display text and graphics.

To use the HC-SR04 with an ESP32 and SSD1306 display, you will need to connect the HC-SR04 to the ESP32 according to the wiring diagram provided by the manufacturer. The HC-SR04 typically requires four connections: Vcc, Trig, Echo and GND.

Once the HC-SR04 is connected to the ESP32, you can use the ESP32‘s built-in pulseIn() function to measure the duration of the sound wave’s return trip. With this duration, you can calculate the distance to the object using the speed of sound.

To display the distance on the SSD1306 OLED display, you can use a library such as the SSD1306 library for Python. This library provides a set of functions for controlling the SSD1306 display, and it can be installed in the Arduino IDE and then included in your sketch.

You can use the library’s functions to initialize the display, clear the display, set the cursor position, and write text or graphics to the display.

In this tutorial we will learn how to use an HC-SR04 reference ultrasonic distance sensor with the ESP32 board.

The HC-SR04 is an ultrasonic distance sensor that can be used to measure the distance to an object by sending out a sound wave and measuring the time it takes for the sound wave to bounce back. It uses the principle of SONAR (Sound Navigation and Ranging) to detect the distance of an object.

When the Trig pin is set to a high voltage, the sensor sends out an 8-cycle sonic burst at a frequency of 40kHz. The sound wave travels through the air and bounces off any object in its path. When the sound wave hits an object, it bounces back and is received by the Echo pin. The sensor then measures the time it takes for the sound wave to travel from the sensor to the object and back, which is known as the “time of flight.” By using the speed of sound, we can calculate the distance to the object.

This sensor is widely used in a variety of applications such as robotics, security systems, and object detection systems. It’s a low-cost and easy-to-use sensor, making it a popular choice for hobby projects and DIY projects.

The SSD1306 display is controlled using an I2C or SPI interface, which allows it to communicate with a microcontroller or microprocessor. It typically requires only a few connections to the microcontroller, such as Vcc, GND, SDA and SCL for I2C or SCK, MOSI, CS, DC and RST for SPI.

The SSD1306 display has a resolution of 128×64 pixels, and it can display text and graphics using a monochrome pixel format. The display has an integrated charge pump that allows it to operate at a voltage as low as 2.7V. This allows for low power consumption and makes it suitable for battery-powered projects.

The SSD1306 display can be controlled using a variety of libraries that are available for different platforms such as Arduino, Raspberry Pi, ESP32, etc. These libraries provide a set of functions for controlling the display and make it easy to use the SSD1306 display in your projects.

Overall, the SSD1306 display is a versatile and low-power display that can be easily integrated into a wide variety of projects. It is a popular choice for creating small, portable, and battery-powered devices such as digital clocks, temperature displays, and other small graphic displays.

The assembly is disconcertingly simple:

Here is the program that displays the distance in cm that separates the ultrasonic sensor from an obstacle.

Note: the following two libraries must be imported: hcsr04 and ssd1306