Check the ignition of an RGB LED by the micro:bit buttons 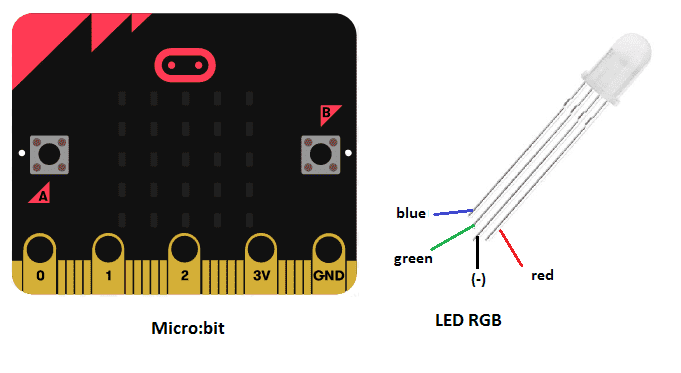 In this tutorial we will control the ignition of an RGB LED via the two buttons A and B of the micro:bit card:

1- When we press the button A, the LED lights up in red.

2- When you press the B button, the LED lights up green.

3- When you press the 2 buttons A and B at the same time, the LED lights up blue.

LED RGB stands for Light Emitting Diode Red Green Blue. It refers to a type of LED that can emit light in different colors by adjusting the intensity of the red, green, and blue light emitting diodes. This allows for a wide range of color options and the ability to create dynamic color-changing effects. They are commonly used in lighting fixtures, displays, and other electronic devices.

methods are numerous and here are some examples:

Here is the program makecode which allows to control the ignition of an RGB LED with the buttons of the micro:bit.