Control a Maqueen robot [Micro:bit] with a remote control 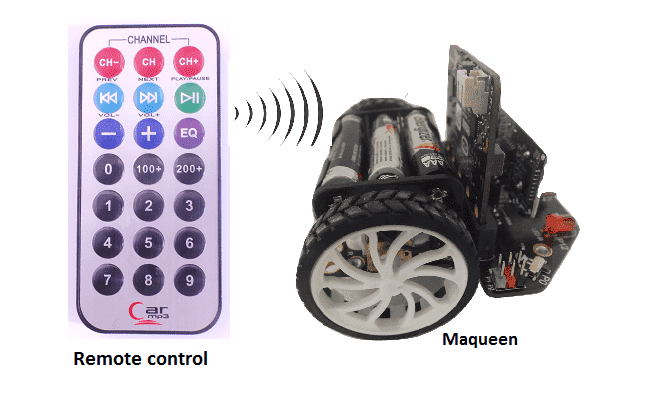 The Micro:bit Maqueen is a small, two-wheeled robot that can be controlled using a Micro:bit microcontroller. It is designed for educational and hobby projects, and can be programmed using the Micro:bit’s software development kit (SDK).

Once you have written the code and connected the infrared receiver, you can test the robot by using the remote control to send commands to the robot. You can also add other features such as obstacle avoidance, line following, and others.

It’s worth noting that the Micro:bit Maqueen robot is a versatile platform that can be used for a variety of educational and hobby projects, and that the infrared remote control is just one of the ways it can be controlled.

This tutorial aims to control the movement of the Maqueen with a remote control.

The Micro:bit Maqueen robot is a small, educational robot that is based on the Micro:bit microcontroller board. It is designed for use in classrooms and other educational settings to teach students about programming, robotics, and electronics. The Maqueen robot features a variety of sensors and actuators, including a pair of motors for movement, an infrared sensor for obstacle detection, and a line-following sensor for following lines. It is programmed using the Micro:bit‘s built-in programming environment, which is based on the MakeCode block-based programming language.

An infrared remote control typically consists of a set of buttons or a joystick that a user can press or move to control the robot car‘s movement. Each button or direction on the joystick corresponds to a specific movement command, such as forward, backward, left, or right. When a button is pressed or a joystick is moved, the remote control sends an infrared signal to the Microbit Maqueen‘s microcontroller, which interprets the signal and controls the motors accordingly.