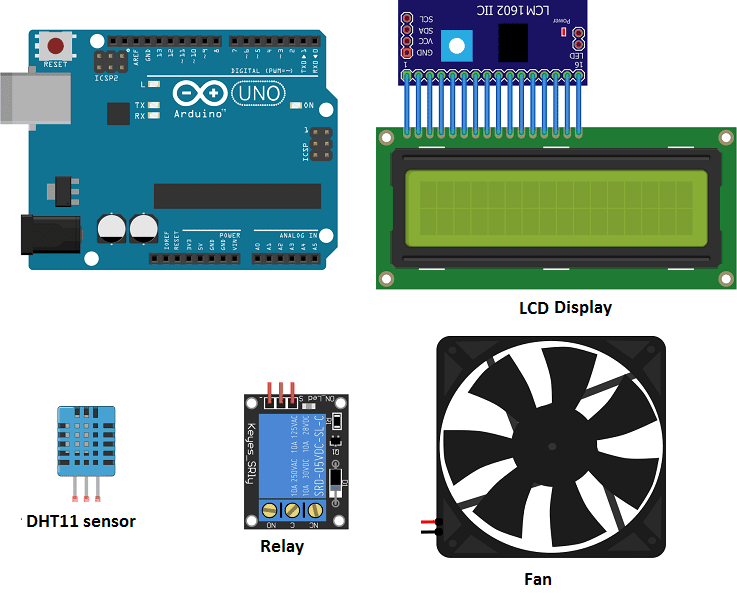 A cooling system is a mechanism or machine designed to lower the temperature of a substance or system. Cooling systems are used in a variety of applications, including refrigeration, air conditioning, and industrial processes. They can be powered by electricity, gasoline, or other energy sources, and can use a variety of cooling methods, such as air cooling, water cooling, or liquid refrigerant cooling. The specific design and operation of a cooling system will depend on the application for which it is used.

An Arduino can be used to control a cooling system by monitoring temperature sensors and activating cooling devices such as fans or refrigeration units when the temperature exceeds a certain threshold. The Arduino can also be programmed to adjust the cooling based on other factors such as humidity or time of day. To control the cooling system with an Arduino, you will need to connect temperature sensors and cooling devices to the Arduino‘s digital or analog inputs and outputs, and write a program using the Arduino programming language (based on C++) to control the system according to your desired temperature and other settings.

In this project a cooling system will be built with Arduino. It mainly uses a DTH11 temperature sensor, fan and LCD display.

When the Arduino board detects a temperature > 28°C the fan starts to rotate until the temperature becomes < 28°C.

An LCD I2C 160A display is a type of liquid crystal display (LCD) that uses the Inter-Integrated Circuit (I2C) protocol to communicate with the controller or host device. The “160A” in the name likely refers to the display’s dimensions, with a screen size of 160×128 pixels. I2C is a communication protocol that allows multiple devices to connect to a single bus and communicate with one another using only two wires (SDA and SCL). This can make it a more efficient and cost-effective solution for connecting multiple devices in a project, as compared to using separate wires for each device.

A 5V fan is a type of cooling fan that operates at a voltage of 5 volts. These types of fans are commonly used in computer systems to cool down components such as processors and graphics cards. They are also used in other electronic devices such as routers and other networking equipment. They typically draw less power than higher voltage fans and produce less noise.

A relay is an electrically operated switch that can be used to control a 5V fan in combination with an ESP32 microcontroller. A relay allows the ESP32 to control a device that operates at a different voltage or current level than the ESP32.

A relay typically has a coil that is energized by an electric current, and a set of normally open or normally closed contacts. When the coil is energized, it creates a magnetic field that causes the contacts to move, either opening or closing a circuit.

To complete the assembly, you can connect:

For the LCD display:

This is the cooling system program.

Note: both libraries must be downloaded  DTH11 et I2c_LCD1602