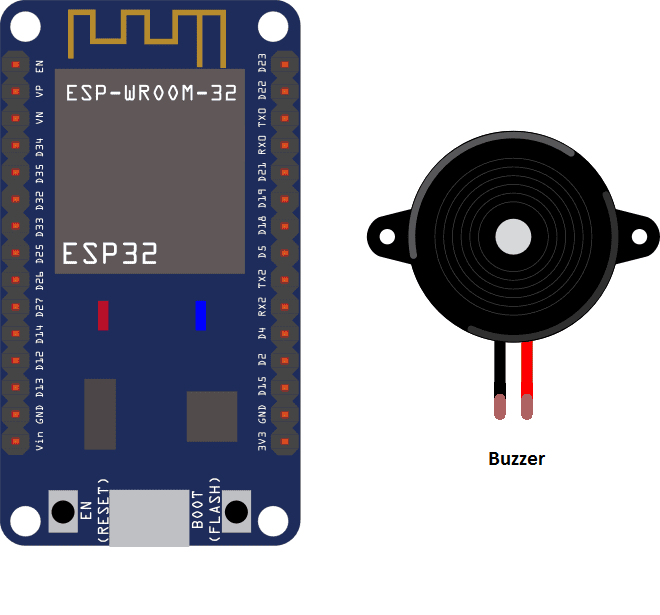 To control a buzzer using an ESP32, you would need to connect the buzzer to a digital output pin on the ESP32 and write code to control the pin’s state.

The buzzer is an electronic device that produces sound when an alternating current is applied to it, so to make it sound we need to generate a square wave with the correct frequency, the ESP32 has digital output pins that can be set to high or low, if we set a digital pin to high and low at a certain frequency we can generate that square wave and make the buzzer sound.

The goal of this tutorial is to sound a buzzer with the ESP32 card.

A buzzer is an electronic device that generates sound by converting electrical energy into sound energy. It typically consists of a piezoelectric crystal, which expands and contracts when an alternating current is applied to it, creating sound waves.

There are different types of buzzers available, including piezoelectric, magnetic, and electro-mechanical buzzers. Piezoelectric buzzers are the most common and widely used, as they are small, inexpensive, and easy to control.

Buzzers can be controlled using a variety of methods, such as using a microcontroller to generate a square wave with the correct frequency, or using a specialized IC (Integrated Circuit) such as a 555 timer.

Buzzers are commonly used in a wide range of applications such as alarms, timers, and warning systems. They can also be used in electronic devices such as mobile phones, computers, and other electronic devices to generate different sounds and tones.

Piezoelectric buzzers are relatively simple to use and are widely used in DIY and hobby projects, including those that use microcontrollers such as the ESP32. They can be easily controlled by a microcontroller by applying a square wave with the desired frequency to the control pin of the buzzer.