Display a character on the MAX7219 display with ESP32 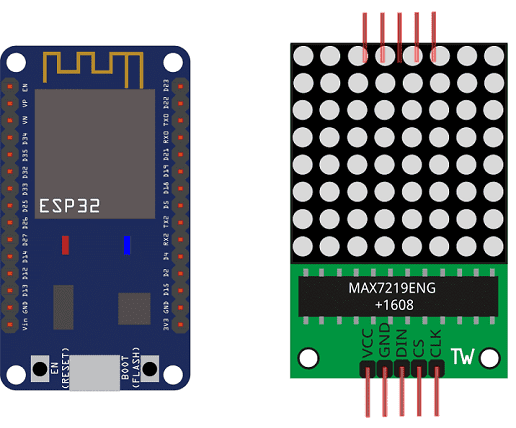 The MAX7219 display can be used in conjunction with an ESP32 microcontroller to control a 7-segment LED display or an 8×8 LED matrix. The ESP32 is a powerful, low-cost microcontroller with built-in WiFi and Bluetooth capabilities. It can be used to control the MAX7219 display via a 3-wire serial interface, which consists of Data, Clock, and Load pins.

To use the MAX7219 display with the ESP32, you will need to install the MAX7219 library for the ESP32. Once the library is installed, you can use the provided functions to control the display, such as setting the brightness, displaying a specific digit, or creating custom characters.

It’s important to note that the ESP32 runs on 3.3V and the MAX7219 operates on 5V, so you need to use a level shifter or a voltage divider circuit to avoid damaging the ESP32.

In this tutorial we will see how to display the letter ‘A’ on the MAX7219 display with the ESP32 card.

An ESP32 card is a type of development board that is based on the ESP32 microcontroller. The ESP32 is a powerful, low-cost microcontroller with built-in WiFi and Bluetooth capabilities. It is commonly used for IoT projects, home automation, and other applications that require wireless connectivity.

An ESP32 card typically includes the ESP32 microcontroller, flash memory, a USB interface for programming and power, and various other components, such as voltage regulators, oscillators, and headers for connecting external devices.

The ESP32 card can be programmed using the Arduino IDE, which supports C and C++ programming languages and has a simple and user-friendly interface. There are also several libraries available for the ESP32, which provide additional functionality and ease of use.

ESP32 cards are available from various manufacturers, with different features and capabilities depending on the specific model. Some ESP32 cards include additional components such as a display, sensors, or a battery management system.

By using an ESP32 card, you can easily create wireless connected devices that can be controlled remotely, and the ESP32‘s low power consumption makes it ideal for battery-powered applications.

The MAX7219 is a serial input/output common-cathode display driver that can be used to drive a 7-segment LED display, or an 8×8 LED matrix. It is a compact and versatile integrated circuit that allows you to control multiple digits with a single digital output pin. The MAX7219 can interface with a microcontroller, such as an Arduino, via a 3-wire serial interface, which consists of Data, Clock, and Load pins. The MAX7219 also has built-in features such as a BCD decoder, a multiplex scan circuitry, and a digit driver. It requires an external power supply of 5V and can drive up to 8 digits, with a maximum current of 150mA per segment. The MAX7219 library can be used to control the MAX7219 display with the ESP32, it’s easy to use and have a lot of functionality.

A test plate for Arduino is a type of test plate that can be used in conjunction with an Arduino microcontroller to automate experiments or tests. The test plate typically contains multiple wells or compartments that can hold samples or test solutions, and is designed to interface with the Arduino’s digital inputs and outputs.

Wires in a robotic system are used to connect and transmit electrical signals between different components of the robot. These components can include sensors, actuators, motors, and the microcontroller, such as an Arduino. The wires in a robotic system are typically made of copper and are insulated to prevent electrical interference and short circuits.

Wires in a robotic system can be used to transmit power, control signals, and data between the different components of the robot. They can also be used to connect the robot to external devices, such as a computer or a power source. The proper use of wires is crucial for the robot to function properly, and a bad wiring can cause malfunction, safety hazards, and even damage to the equipment.

It is important to use the right type of wire for the right application, and it is also important to keep the wires organized and secure to prevent them from getting tangled, damaged, or disconnected.

Here is the program which displays the leeter ‘A’ on the MAX7219 display.