Measure the temperature with ESP32 and DHT11 sensor 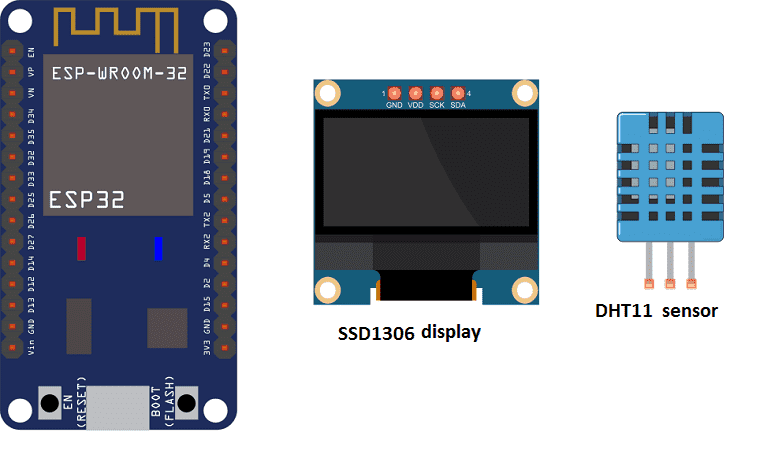 The DHT11 sensor is a low-cost humidity and temperature sensor that can be used to measure the temperature and humidity of the environment. To use the DHT11 sensor with an ESP32, you will need to connect the sensor to the ESP32 according to the wiring diagram provided by the manufacturer.

In this tutorial we will see how to read the temperature measured by the DTH11 sensor and display it on an SSD1306 display.

The DHT11 sensor is a low-cost, digital humidity and temperature sensor. It is commonly used in various types of projects such as weather stations, home automation, and HVAC systems.

The DHT11 sensor has four pins: Vcc, Data, Not Connected, and GND. The Vcc pin is used to provide power to the sensor, typically 3.3V to 5V. The Data pin is used to send the temperature and humidity data to the microcontroller. The Not Connected pin is not used and should be left unconnected. The GND pin is used to ground the circuit.

The DHT11 sensor uses a one-wire communication protocol to send data to the microcontroller. The data is sent in a 40-bit packet, which includes the humidity and temperature data, as well as a checksum for error detection.

The DHT11 sensor is relatively simple to use and it’s a popular choice for hobby projects, DIY projects and low-cost monitoring systems. It’s relatively cheap and easy to find. However, it’s important to note that the sensor has a limited measurement range and it’s not as accurate as other types of temperature/humidity sensors.

The SSD1306 display is controlled using an I2C or SPI interface, which allows it to communicate with a microcontroller or microprocessor. It typically requires only a few connections to the microcontroller, such as Vcc, GND, SDA and SCL for I2C or SCK, MOSI, CS, DC and RST for SPI.

The SSD1306 display has a resolution of 128×64 pixels, and it can display text and graphics using a monochrome pixel format. The display has an integrated charge pump that allows it to operate at a voltage as low as 2.7V. This allows for low power consumption and makes it suitable for battery-powered projects.

The SSD1306 display can be controlled using a variety of libraries that are available for different platforms such as Arduino, Raspberry Pi, ESP32, etc. These libraries provide a set of functions for controlling the display and make it easy to use the SSD1306 display in your projects.

Overall, the SSD1306 display is a versatile and low-power display that can be easily integrated into a wide variety of projects. It is a popular choice for creating small, portable, and battery-powered devices such as digital clocks, temperature displays, and other small graphic displays.

To perform the assembly

For DTH11 sensor, we connect:

Here is the program which reads the temperature measured by the DTH11 sensor and displays it on SSD1306 display.

Note: you must import the following libraries: ssd1306