Control a small fan with a smartphone and the Micro:bit 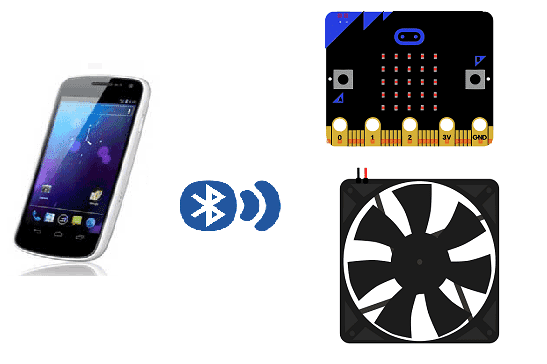 The micro:bit has built-in Bluetooth Low Energy (BLE) capabilities that allow it to connect to other devices, such as smartphones, tablets, and computers. BLE is a wireless technology that is designed for low power consumption and is often used for Internet of Things (IoT) devices and other applications where battery life is a concern.

The micro:bit can be used as a BLE peripheral device, which means it can advertise itself and connect to other devices, such as a smartphone, that act as the central device. Once connected, the micro:bit can send and receive data over the BLE connection.

The micro:bit can be programmed to advertise itself and wait for a connection using the built-in radio module and the micro:bit‘s programming environment, such as the MicroPython or the Microsoft Block Editor. This allows the micro:bit to connect to other BLE-enabled devices and interact with them, such as sending and receiving data and controlling the robot’s motors.

In this tutorial, we will control a small fan by Bluetooth using the Micro:bit card and a smartphone.

we create two programs: a mobile application with App Inventor for the smartphone and a makecode program for the Micro:bit card.

Controlling a small fan with a smartphone and the micro:bit can be done by using a combination of the micro:bit‘s built-in Bluetooth Low Energy (BLE) capabilities and a simple circuit. Here’s an overview of the steps:

A 5V fan is a type of cooling fan that operates on a 5-volt DC power supply. These fans are commonly used in a variety of electronic devices, such as computers, servers, and other equipment that generates heat. They are also used in DIY projects and hobbyist applications. Because they operate on a lower voltage, they typically consume less power and generate less noise than fans that operate on higher voltages. They are typically smaller in size than other fans. They typically come in the form of a DC motor that spins a rotor with blades. They are connected to the power source with a lead wire and come in different sizes and airflow rates.

A relay is an electrically operated switch that allows a low power circuit to control a high power circuit. It consists of an electromagnet that, when energized, moves a set of contacts to either make or break an electrical connection. Relays are used in a wide range of applications, such as controlling lights and motors, and providing isolation between different circuits. They are commonly used in automotive, industrial, and home automation systems. The most common types of relays are electromechanical relays (EMRs) and solid-state relays (SSRs). EMRs use an electromagnet to physically move a set of contacts, while SSRs use semiconductor devices such as transistors to switch the current.

The relay is used to turn the fan on and off.

To build the assembly we can connect:

Here is the makecode program which allows you to connect the Micro: bit card to the smartphone and to receive a message containing the order to start or stop the fan.

We create a mobile application named ‘start_ventilator’ with App Inventor which allows remote control of the fan.