Control the lighting of LED by push button with ESP32 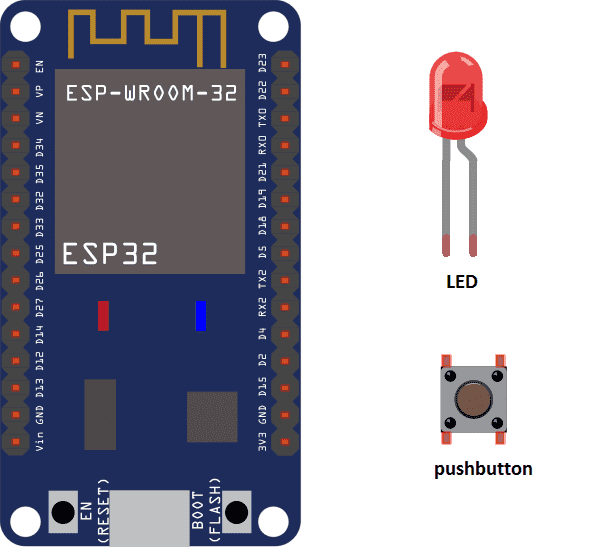 An ESP32 microcontroller can be used to control an LED by sending a digital signal to a transistor or a relay, which can then switch the power on and off to the LED.

In this tutorial we will control the lighting of an LED via a push button:

1- When the button is pressed, the LED lights up

2- When the button is released, the LED goes out.

A red LED (Light Emitting Diode) is a type of semiconductor device that emits light when a current is passed through it. The light emitted by a red LED is typically in the red portion of the visible spectrum, with a wavelength between 620 and 750 nanometers.

Red LEDs are widely used in a variety of applications, such as indicator lights, automotive lighting, traffic signals, and electronic displays. They are also commonly used in electronic devices such as televisions, DVD players, and digital cameras as a backlight source.

Red LEDs are relatively inexpensive and have long lifetimes, making them a popular choice for many applications. They are also relatively low power, which makes them suitable for battery-powered devices.

LEDs are becoming increasingly popular due to their energy efficiency and long lifespan. They also have a fast response time and can be easily controlled with a microcontroller.

A pushbutton, also known as a switch or button, is a type of input device that is used to activate a circuit or signal. Pushbuttons are typically used to control electronic devices or to provide input to a computer or microcontroller.

Pushbuttons typically consist of a button that can be pressed, and a mechanism that activates a switch when the button is pressed. The switch can be a simple mechanical contact, or it can be an electronic switch such as a transistor or a microcontroller pin.

Here is the program that controls the ignition of an LED connected to pin D23 of the ESP32 board.